CWC Vietnam AAR – “It was a very good day for Charlie”

Well after a whole year, and almost an additional month, I finally got around to running another Vietnam game (and actually the first game in a year as well!) This is a quick After Action Report (AAR) of the game. I forgot to bring my camera, so the photographs below were taken by Curtis T. (Thanks, Curtis!) I will try to get everything correct, but I did not make any notes immediately after the game and I waited over a week to type up this AAR, so I may have made some errors. The Americans were played by Pat L. (Aero Rifle platoon leader), Curtis T. (Leg Infantry platoon leader), and Blake W. (Armored Cavalry platoon leader and Overall Commander). The People’s Army of North Vietnam (PAVN or NVA) was commanded by Steve H.

Each stand of infantry represented a squad of infantry or one vehicle. The Americans players were told that this is 1972 and the bulk of the Americans have been pulled out of Vietnam with the exception of a few units that will be cycled back as equipment & materials are handed over to the ARVN (South Vietnamese army). Their command is one of those units. Their troops’ morale is poor as no one wants to be the last to die for Vietnam, as such none of their infantry will engage in close assault with enemy forces and they also have an additional -1 to command rolls for moving orders if engaged in small arms combat, but not for shooting (they much rather just keep shooting until the enemy is dead instead of moving).

The terrain was heavy with jungle and woods as to make up for the lack of hills for the area around the DMZ. There were two small farms on the board that were separate from each other. A road ran the length of the board (north to south) with a small cross road connecting the two farms.

The PAVN forces consisted of 1x CO, 2x headquarters, 12x infantry, 1x mortar, 2x unarmed porters units, and 2x PT-76 tanks that would come in as reinforcements. The PAVN was allowed one Ambush and everything else was under hidden blinds. 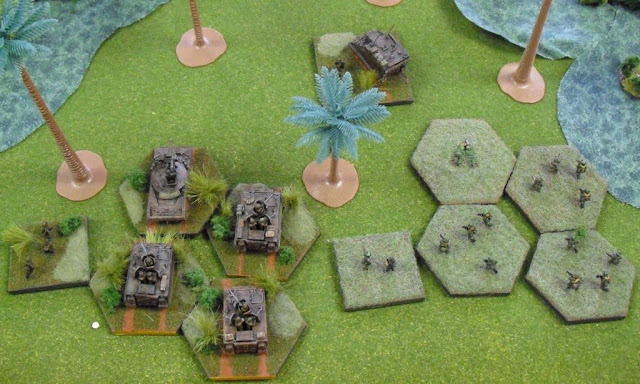 The American Armored Cavalry platoon and the Leg Infantry platoon off to one side of the board while players were decided what they wanted to run.


The Americans were instructed to move up and determine where the enemy was located, engage them and inflict heavy casualties; the PAVN’s objects was to hold the US long enough to get the unarmed porters off of the board (who could not start moving until the PAVN had engage the US in one round of combat.)

The US decided to have the leg infantry platoon ride on the tracks from the armored cavalry, while the aero rifles would fly in an land right next the farm on the west side of the board…it all went downhill for American players after that. What was to follow was just sad.

The aero rifles under LT Pat lands between the farm and the rice paddies. As the Huey ‘slicks’ were touching down, deadly AK-47 fire was coming from a hidden bunker under the farmhouse. First Squad was ripped to shreds as they scrambled off their ‘Slick’ and into a perfectly laid out kill zone. The rest of the aero rifles platoon and the ‘Slick’s’ door gunners returned fire but with the surprise factor and seeing 1st Squad casualties, the fire was only able to suppress some of the PAVN forces.

The armored cavalry platoon under LT Blake slowing advance up the road as if it was a Sunday morning back in the States, without a care in the world (they only made one command roll – oddly enough, this was going to the standard for them pretty much through the rest of the game).

The leg infantry platoon under LT Curtis decided to dismount one squad to check out a possible ambush site (a hidden marker) along the road. As LT Curtis told the 3rd Squad to dismount, a single shot rang out from their ACAV which just missed hitting him in the head…the other track was claiming it was an accidental discharge, but LT Curtis was not so sure about that. (Curtis rolled a commanded blunder and got a ‘Cease Fire’ blunder resulting in one shot at his HQ…nothing quite like setting the proper mood for the rest of the game!)

The PAVN under Comrade Steve starts moving their porters towards the north and the hidden marker in the rice paddies on the opposite side of the aero rifle platoon turns out to be a single rifle squad.


Turn Two
LT Pat tries splitting his platoon’s fire between the bunker under the farmhouse and the PAVN troops in the rice paddies. He is unsuccessful. He starts to call back in the ‘Slicks’ to help lay down some fire, but is unable to contact them (only one successful command roll).

LT Curtis successfully yells at the other squad to get off the ACAV and check out the wood line. They advance up to the woods and stop, refusing to go any farther (again, only one successful command roll!)

LT Blake however is watching the howling monkeys in the trees and is thinking how he can ship one back to the US (failed command rolls).

Meanwhile, the PAVN forces at the farm are determine to show that they are heroes that Uncle Ho was referring to as they lay accurate fire into the 2nd Squad until they don’t see them moving anymore.


Turn Three
LT Pat is realizing that things are going from bad to worse for him as he is too close to call in artillery or air support, so he calls back the ‘Slicks’ to help lay down fire on the bunker and in the rice paddies. While the additional firepower from the door gunners, he now sees that he is successfully hitting the enemy, but only suppressing them at best.

LT Curtis, after throwing a can of Ham & Beans from his C-rations at his 3rd Squad, was able to get them to adventure into the woods to find some old copies of Playboy and a long abandoned campfire. Deciding to stop and look at the centerfolds, they didn’t hear LT Curtis yelling for them to get back to the tracks.

LT Blake is now thinking about if he left his footlocker unlocked back at the base camp (can you guess how many successful command rolls were going on here?)

Driving south, two PT-76s appear on the field in replies to request of assistance from Comrade Steve. Back over the PAVN bunker, as one PAVN squad cowards toward one side the bunker, the other squad shows that they are the foundation for victory over the capitalist invaders as they then switch their sites to the aero rifle’s 3rd squad. In a few violent seconds, another US squad was removed from their beloved lands.

LT Pat looks back at his faithful RTO and can see the fear in his eyes, “There is a whole group of Charlie’s shooting like Alvin York! We got to get out of here!” LT Pat calls in the ‘Slicks’ to make one more pass to light up the bunker. With just a machine gun squad and some LAWs, and the door gunners from the circling ‘Slicks’, LT Pat directs the fire into the bunker. Finally able to bracket the slits, he is successful in suppressing one of the two PAVN squads.

LT Curtis starts jumping up and down on top of the ACAV at his 3rd squad to come back to the tracks, it appears that they found something more than some old copies of Playboy in the abandon camp site.

LT Blake all of a sudden remembers that he is suppose to be linking up with the aero rifle platoon, and orders his command forward…leaving behind LT Curtis’s 3rd squad in the dust.

The PAVN PT-76’s drove as fast as they could until they were able to get themselves in a good position to engage the Americans that would come to rescue the badly bloodied aero rifle platoon. Back at the bunker, rounds were being traded, but with no losses on either side. 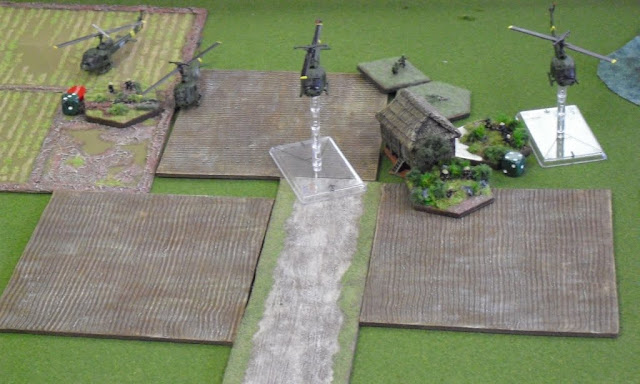 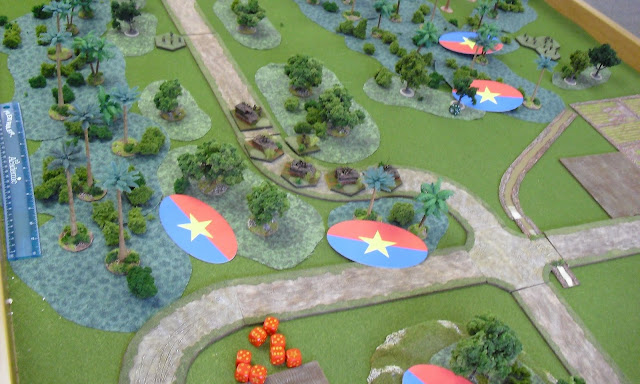 Turn Five
“I don’t care if it is hot or not, get that chopper down here now!” LT Pat screamed into the handset of the PR/C 77 radio. As the ‘Slick’ came in to pick up the survivors of the aero rifle platoon, rounds went flying in and rattled inside it. The door gunner witness the rounds ripping into the engine and seeing the thick, oily smoke bellowing out just before the Huey went into a spin and collided with the ground. Nguyen, back in the bunker smiled as pulled out his now empty clip from his AK-47.  With fury, the remaining 'Slicks' door gunners opened up on the PAVN squad in the rice paddies and riddled them with 7.62mm rounds.

LT Curtis started yelling, “Dismounted, get to the wood line and take up fighting positions” as the ACAV’s came to a halt. All of his platoon dismounts and runs in the woods as he is left there wondering if they did it because he order them to or if they did it because they did not want to be around the ACAVs with PAVN tanks in the area.

LT Blake directs the M551 to drive around the wood line and report what he sees. As the M551 reaches the crossroads, two shots are heard from a far and the M551 is seen to shudder a little bit before suddenly it is replaced by an orange ball of fire. This seems to jolt LT Blake back to fact that he is in Vietnam!  “Hard right turn, head back to the base camp!” LT Blake yells in to mic as the ACAV drivers obey.
LT Curtis stands there with his jaw on the ground as the ACAV abandon him and his platoon as they drive hell bent for leather back for the base camp (Yes, Blake decided that running away was the best option and he rolled a critical command success! Amazing, the only time a critical success is rolled and it applies to a retreat!)

The crews of the two PT-76s let off a cheer as they see their shots caused an American tank to catch on fire.  In the bunker, Comrade Steve looked over at the dead PAVN soldiers in the rice paddies, “Their love for Uncle Ho was weak, that is why they died” as he said to follow comrades, “But they were still our brothers, these Americans will pay dearly.” With that, Comrade Steve trained his iron sights on an American machine-gun team and squeezed the trigger with deadly accuracy.

Losses: US: 6, PAVN: 1 (The US has now just reached it Breakpoint to start rolling for the force's overall morale.)

“Hey, I can see those tanks from here”, the RTO points out to LT Pat after seeing the fireball in the sky from a burning M551. “Give me that handset, ‘This is November One-Niner Lima, I have an airstrike mission’” LT Pat spoke into the radio’s handset.

A South Vietnamese F-5 Freedom Fighter was vectored in on the mission and successfully drops napalm on the two PT-76s, knocking both out. LT Pat then convinces one of the braver ‘Slick’ pilots to come down and retrieve both him and the down crew from the previous Huey.

As Comrade Steve is pulling out a new clip of ammunition, he drops it in the mud. Reaching down and grabbing it to clean off the mud, he fails to see the Americans jumping on another Huey until it is too late, it gets away from him.

LT Curtis is still amazed that the cavalry just abandoned his platoon…it was going to be a long march back to the base camp. 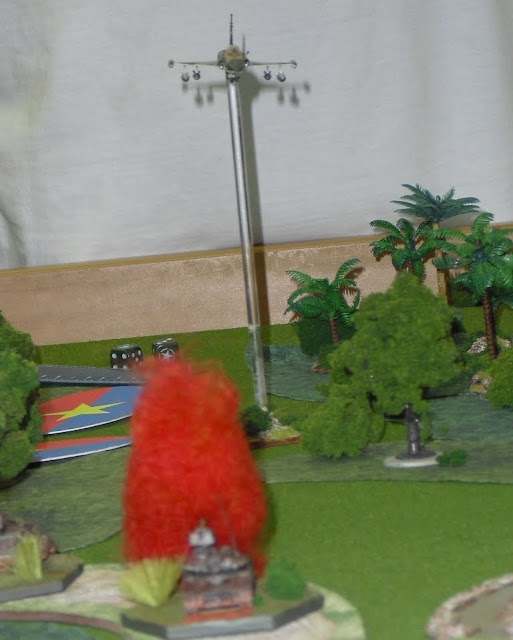 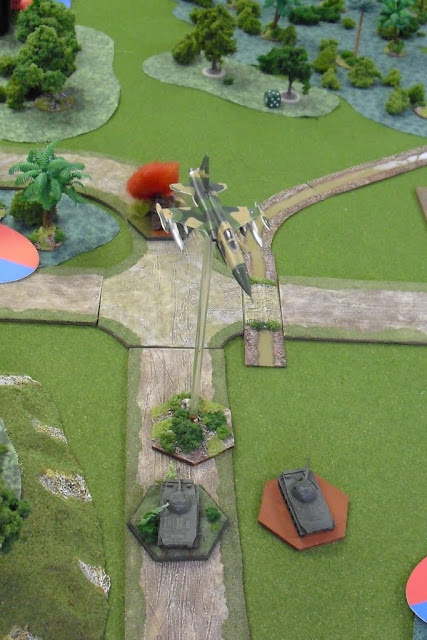